The Qinghai-Tibet Railway or Qingzang / Ching Hai Tibet Railway (Chinese: 青藏铁路) is the world highest elevation railway which connects Xining in Qinghai Province to Lhasa, Tibet Autonomous Region of China, and to the whole China railway network. On this railway, passenger trains run from Xining, Lanzhou, Chengdu, Chongqing, Beijing, Shanghai, and Guangzhou since 2006.

The Scenery along the Qinghai-Tibet Railway

Reputed at “the Sky Road”, the Qinghai-Tibet Railway itself is a great wonder without doubt. In Addition, the breathtaking scenery is also worth your attraction along the railway. Traversing plains, mountain ranges, rivers and lakes, grasslands, densely populated cities and the desolate Gobi, the scenery of Qinghai-Tibet Plateau is majestic and of various types, especially the section from Golmud to Nagqu.

Do not miss any moment of extraordinary nature which you will sea through the Qinghai-Tibet train windows. Passing through the Fenghuoshan Tunnel of Tanggula Mountain, you really get a sense of the altitude at which you're moving. At a soaring 5068m above sea level, Tanggula Station is the world highest railway station. As the Tibet train climbs up a mountain pass trudging toward Lhasa, the lofty snow-capped Kunlun Mountains are veiled in a wispy mist.

Through the train window, the great expanses of the Qinghai-Tibet Plateau roll into view: the grasslands dotted with black yaks and prayer flags fluttering from gold-topped temples. This is definitely the “Roof of the World”. 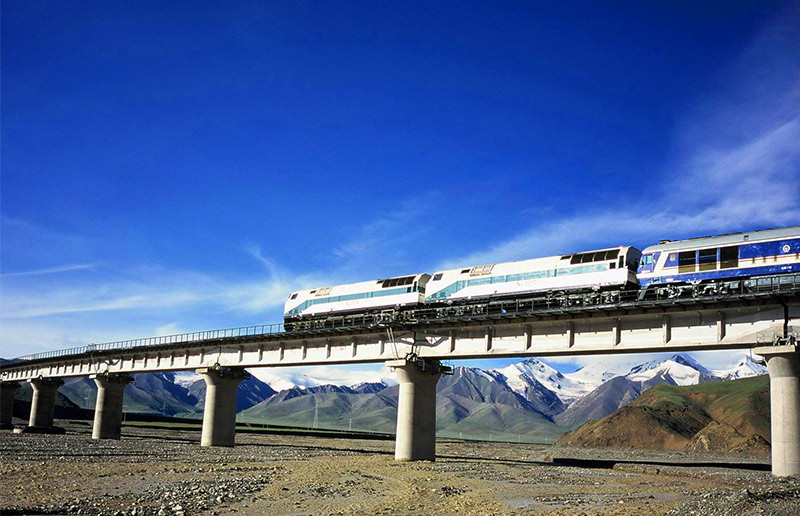 The Trains Running on the Qinghai-Tibet Railway

The highest Qinghai-Tibet Railway in the world connects Lhasa not only to Xining but also to the whole Chinese railway network. Since its opening in 2006, Tibet train has become a good choice for international and domestic tourists to Tibet. Nowadays, passengers can take a direct train from these cities to Lhasa, such as Xining, Lanzhou, Chengdu, Chongqing, Beijing, Shanghai and Guangzhou.

Every day, there are 5 to 6 trains running the same route between Xining and Lhasa.

The trains from these cities to Lhasa:

The Length of Qinghai-Tibet Railway and Train Journey Time

Extending from Xining to Lhasa, the whole length of Qinghai-Tibet Railway is 1956km. It takes only about 21 hours for Tibet trains running on it.  Among them, there are 960km of the railway located at more than 4000m.

The Maps of Qinghai-Tibet Railway

Why China Built the Qinghai-Tibet Railway?

Located at the southwest border of China, India, Nepal, Bhutan and Pakistan, Tibet has the very important geographical position. It promoted the economic development of Nepal's northern mountainous areas, and helped Nepal to appear on the world political stage independently.

As the limited industrial capacity of Tibet, the Tibetan economy highly depends on imports from mainland China provinces. It is an important issue to transfer goods in and out of the region.

Before the railway’s operation, the basic route was the Qinghai-Tibet Highway which was build in the 1950s and connects Tibet to the neighbouring Qinghai province. Each year, there are only less than a million tonnes of goods being transferred. After the new railway’s operation, it brought a significant reduction in transport costs increased goods’ movement. By 2010, about 2.1 million tonnes were carried by train. The operation of the Qinghai-Tibet Railway also has shortened the land transportation time of trade between major cities in mainland China and Nepal from 12 to 18 days to less than one week.

At the same time, the Qinghai-Tibet Railway strengthens ties of Tibet and other Chinese areas, promotes cultural exchanges between Tibetans and other ethnic groups, and enhances the need for national unity.

It is also expected to promote the development of Tibet tourism. Chinese state media ever reported that from January to July of 2007, Tibet had seen over 1.7 million arrivals - only slightly fewer than that of the whole 2005. In summer of 2018, the Qinghai-Tibet Railway has accepted 2.862 million passengers.

The History of the Qinghai-Tibet Railway

For centuries, Tibet was till cut off from the outside world by its remote location, extreme climate and geographic environment. The isolated region stopped all the explorers and travelers, until the operation of the Qinghai-Tibet Railway in 2006 when it connected Tibet to the rest of China.

1) In the 1950s, the CPC Central Committee decided to build the railway to Lhasa.

2) Since 1956, the first Survey and Design Institute of Ministry of Railways has carried out a comprehensive survey and design work for the over 2000km line from Lanzhou to Lhasa.

3）In 1984, the railway from Xining to Golmud was completed and opened to traffic.

4）In May 2002, the permafrost test on Qingzang Plateau was carried out.

5）In March 2003, the train track was laid through Kunlun mountain tunnel; in June, Tanggula Railway Station, the highest altitude in the world, was started to build; in August, the laying and erecting project of train track successfully passed through Hoh Xil depopulated zone.

6）In August 2005, the subgrade, tunnel, bridge and culvert works of the whole Qinghai-Tibet railway were basically completed; on August 24, the railway track was laid through Tanggula Mountain; on October 12, the track laying of the whole railway was completed.

A modern American train traveler Paul Theroux once wrote in his book "Riding the Red Rooster" that the Kunlun Range was "a guarantee that the railway will never get to Lhasa". But the assertion has been broken as a train coded "Qing 1" from Golmud to Lhasa runed through a 1,686-meter-long tunnel in Kunlun Mountain July 1, 2006.

The Future Connection of Qinghai-Tibet Railway to Nepal

In a meeting between Chinese and Nepalese officials on 25 April 2008, the Chinese delegation announced the intention to extend the Qinghai-Tibet railway to Zhangmu (Nepali: Khasa) , the China-Nepal border. Nepal had requested that the railway be extended to enable trade and tourism between both countries.

The Lhasa-Shigatse railway opened in August 2014. In June 2018, China and Nepal signed a series of agreements including the construction of Shigatse-Kathmandu railway during Nepali prime minister Oli's visit to China. Construction is expected to be completed by 2024.